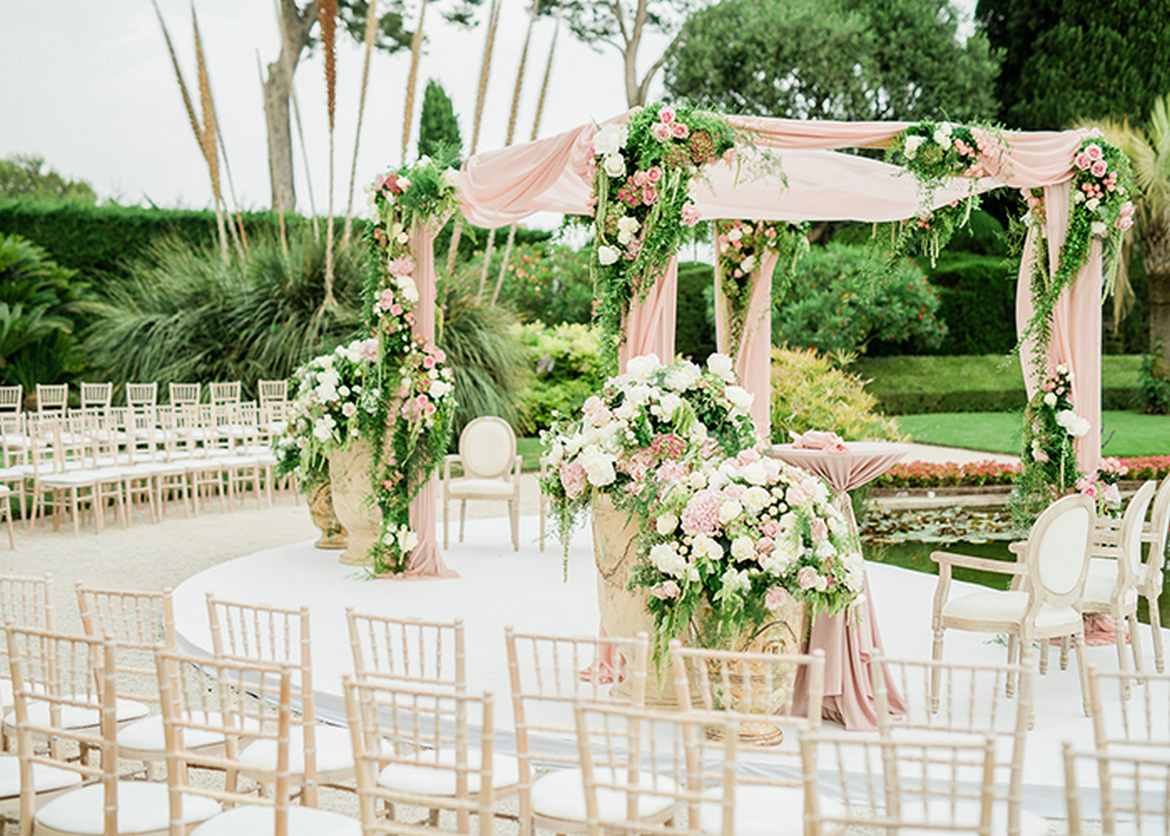 The wedding of Lauren & Jonathan

This wedding was probably the most exciting and difficult of the history of Aava!
Once again, we had to fight the elements and use our reserves of ingenuity and perseverance to deliver this incredible wedding!
M. and Mrs Blattner live in Congo. They wanted to organise their son’s wedding on “The World”, the biggest and most luxurious residential yacht in the world which would be in Cannes in June 2019. Owners of a sumptuous apartment on the yacht, our clients travel around the world all year long. Fascinating, isn’t it?
That is how we embarked on a world tour whenever a technical visit on the yacht was required. How hard our job can be sometimes! 😉
The logistics were going to be very complicated as the yacht would be anchored 25 mns from the Cannes harbour, and we would have to load all the equipment on a barge. That seemed difficult, yet feasible.
In parallel, we proposed to organise the religious ceremony at the Villa Ephrussi de Rothschild on the eve of the reception which was due to take place on the yacht.
However, organising a traditional Jewish ceremony on a Friday evening, just before the beginning of Shabbat, was a true challenge, never achieved before.
Nonetheless, thanks to Rav Moyal, the devoted great rabbi of Cannes, we arranged for him to make his way back to the synagogue by motorcycle taxi, so that he would be back in time before dusk. What a story, and how funny! It reminded us of the famous Louis De Funes’ “Rabbi Jacob” comedy film. 😊
The bride dreamt of an enchanting garden theme, decorated with a mix of wood and flowers, with shades of green and pink conveying love and romance…In order to recreate this universe on the yacht, our florists created a unique and fantastic design never seen before. Dozens of 1,5 high trees would decorate the tables, suspended gardens would beautify the buffet… all thanks to our amazing team of artist decorators.
The Chuppah, symbol of Jewish weddings, would take place in Saint Jean Cap Ferrat, and would be in the same tones. The evening would be full of surprises and entertainment of all sorts: live painting, live bands, fireworks…
So you may now wonder what the problem was? Well… it was the WIND!!
Terrible gusts of wind, rarely seen on the Riviera, prevented us from loading our equipment on the yacht.
Our teams spent more than 18 hours on the barge, attempting a dozen of round trips, and systematically meeting with the refusal of the captain to load anything for safety reasons. All the equipment was finally transported on small tenders which were authorised to approach the boat, but upon which we could not load any trolleys nor crates. Our amazing staff had to carry and load all the equipment, equivalent to nearly 120m3, by hand! A nightmare!
A few hours later, the miracle happened, and the wedding occurred as planned! It was a sumptuous wedding, and noone could have imagined all the problems we had to deal with just a few hours earlier. Noone, except the father of the groom, who, aware of the set-up issues, gave a moving speech in our honour which was followed by a standing ovation from all the guests.
Everyone in our team had tears in their eyes…A truly unforgettable moment!